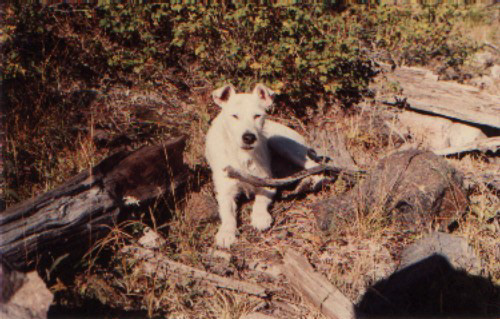 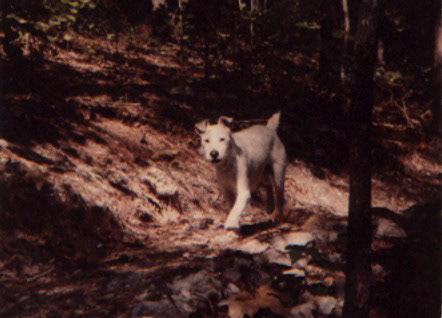 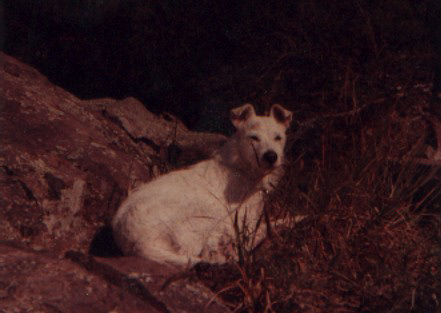 I figured I'd better write this before I get Alzheimer's and can't remember the details.
How Clyde came to be a part of the Budde family?
Just after graduating from Washington University, we had to put our dog, Blackie, down. I wanted another dog right away. My mother who had had a stroke did not feel that was a responsibility she wanted or could take on. I was not happy with her decision.

Several years later, she decided that she wanted a dog. For some probably very stupid reason, I told her I did not and would not give her any money to buy a dog.

She looked through the paper (no internet in those days) and found a lady who had a litter of pups she wanted to sell. My mother had a few dollars squirreled away and bartered this along with some costume jewelry to purchase the dog. I drove her to this ladies house but stayed outside while the bargaining was going on.

We put the dog in the car and drove home. The dog was filthy so the first thing we did was give him a bath. We then wrapped him in a bath towel and put him on a chair in the living room where he went to sleep.
How Clyde got the name "Clyde"?
Clyde was a mixed breed terrier. As an adult, he weighed perhaps 25 pounds. I had had two cocker spaniels prior to Clyde but had not realized how inbred and "dumb" they had been. Terriers are smart dogs.

At the time we got Clyde, President Johnson was in office and their family dog was named "Yuki". Mom wanted to name him with that name.

I thought that was a stupid name for a dog so I lobbied for another name. During that time, The Steve Allen Show was my favorite TV program. I liked it because it was goofy. One of his continuing things was to refer to things as "Clyde" such as "I fell and broke my Clyde". Thus Clyde seemed like an obvious name for this new family member.

The name stuck. Later on, I started referring to him as Clyde The Wonder Dog. No other reason for this other than I thought it was funny.
How Clyde became my best friend?
As my mother bought the dog, it was initially HER dog. He kept her company during the day while I was at work.

When Clyde was going through the "potty training" stage, he was fond of peeing on the carpet in the dining room by the bay window. One time I got frustrated with his lack of progress in learning that was not the proper thing to do. I was on my knees trying to make my point and I picked him up and put him back down pretty hard. He squealed and I immediately picked him up and hugged him.

From there on out he was MY dog.
Clyde loved to play with the neighbor's dogs
The Helfrich's were the neighbors who lived behind my house. We shared a wire backyard fence. Over Clyde's lifetime, the Helfrich's had two dogs. Clyde enjoyed playing with these two dogs so much that he figured that he could jump the wire fence and be able to play up close and personal.

At the end of the play, both dogs were usually full of doggie saliva.
Clyde loved his popcorn
Some evenings while watching TV, I would make a huge bowl of popcorn. Clyde would wait alongside me as I was popping the corn.

We would then proceed to the TV room and I would scoop up a big handful of pop corn and throw it in the air. Clyde would furiously eat the pop corn off the floor.
Clyde goes for a swim in the Webster Groves pool
For a number of years, I coached swimming at the Webster Groves Swim Club. Our summer practices would begin at 8:00 PM after the pool closed to the public.

We were at the time of the season when we had an important meet coming up that weekend and I had our workout planned to peak the swimmers for that meet.

We all arrived at 8:00 PM but the pool had people in it. In talking with the pool manager, he apologized for forgetting to let me know that the pool had been rented that evening. As the rental was to be complete at 10:00 PM, I told all of the swimmers to come back then for their workout.

I didn't want to leave Clyde alone that long, so I drove home and brought Clyde back to the pool with me. This was his first time at a swimming pool. In fact, I did not know whether or not he knew how to swim.

The swimming pool was 50 yards long and the deep section was built in a "T" fashion to accommodate diving boards. The gutter system was what was termed "wash over" gutters. As the kids were swimming laps, Clyde would bark at the swimmer in the lane closest to the edge... Kevin Kennedy. Clyde would occasionally venture into the gutter to harass Kevin.

Well one lap, the inevitable happened. Clyde was so intently harassing Kevin that he walked into the pool. It was then that I found out he could swim as he climbed out of the pool and continued to harass Kevin.
One Nut / Uni-Ball
It was my swimmers that bestowed upon Clyde another of his nicknames. Clyde had a physical infirmity where he only had one testicle thus the two nicknames "One nut" and "Uni-ball". Thanks Chuck Reller!
Clyde drinks gin and gets drunk
I had a friend over and we were watching TV and drinking Tanqueray on the rocks. I had set my glass on the floor for a bit between swallows. We were deep in conversation when my friend points out that Clyde was lapping away at the "Tanq". By the time we stopped laughing and I bent over to pick up the glass, Clyde had consumed the remaining liquid.

Clyde tried to scratch his head and of course fell over. He also got pretty sick that night. In retrospect, it was probably a good thing he threw up so much.
Clyde takes a trip to the Vet
Actually Clyde took many trips to the Vet but this one has a funny story to go with it.

I would take Clyde to the Humane Society when he needed to see a Vet. I came to the opinion that many of the vets who worked on Clyde were young vets doing their residency work.

This particular time I asked the young vet about Clyde's physical infirmity... you know the "one nut" thing. Clyde was positioned on his side on a stainless steel table. The vet started feeling around for the missing body part. He was very serious when he explained to me that this was not uncommon and that perhaps we should consider scheduling an operation to remove it as it could become cancerous.

He was still feeling around when he ran out of his "speech" but he still had not found it.

As I don't like it when folks are serious for very long, I said to the vet: "You know you and my dog are going to have to get married now".
↑Back to Top